Entrance of MART, Contemporary and Modern Art Museum of Trento and Rovereto; by Lapo Luchini [CC-BY-SA 3.0], via Wikimedia Commons

A Wikipedian in residence at MART

MART, Contemporary and Modern Art Museum of Trento and Rovereto, Italy, and Wikimedia Italia announce the opening of a call for a Wikipedian in residence, that is, an experienced user of Wikipedia who will be present in the structure for a six-months period to assist in the creation of items related to the work of the museum. The (paid) residence, the first of its kind in Italy, is scheduled for the period from May to October 2014, and is born after MART joined Wikipedia's GLAM Project.

The collaboration of the Wikipedian will be to upload images and documents on Wikimedia Commons and Wikisource, with the aim to strengthen the articles on museum-related work in the field of conservation, documentation, promotion and dissemination of art, to make freely available to a vast public a large and various data asset.

To apply, you must submit your CV in PDF format before Sunday, April 13, 2014, along with a covering letter to the address wir@wikimedia.it, with te subject “Candidatura WIKIPEDIANO IN RESIDENZA – MART”. The full text (in English: the position requires detailed knowledge of Italian language, but it is open to everyone) of the call, with a detailed list of requirements, can be found on our site. 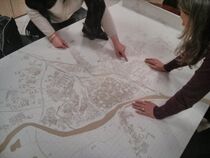 Starting from this number of Wikimedia News, we are happy to add a column about news from OpenStreetMap. (Wikimedia Italia is going to become the official Italian chapter of OSM). Note: in the English version of the newsletter we will publish only the news about initiatives happening in Italy.

Saturday, April 5 in Florence, at Impact Hub, will host the General Shareholders' Meeting of Wikimedia Italia. The event is open to everyone! We invite each member to bring a friend and spread the word (you can also donate her or him a subscription :-) ). To participate you must register by filling out the simple form found at this link: anyone can book up to two tickets.

The meeting is called at 10:00 in first call and at 14:00 in second call; the program includes a morning session with a presentation of ongoing projects and an afternoon session in which the resolutions of the Board of Directors will be ratified, the final balance for year 2013, and the provisional balance for year 2014 will be approved; moreover a vote will be held for the renewal of part of the Board (remember that only members can vote up to date with the payment of the fee). Note: As required by our bylaws, all members who do not renew the subscription in 2013 will be declared forfeited. If you have any doubt about the status of your registration, please ask the secretariat. All details can be found on the relevant page of the relevant page of the Wikimedia Italia website (visible only to members); there you can also find information about availability of accommodation and transport, as well as the form for proxies.

In occasion of the meeting, member cards for 2014 are being shipped to the homes of all members. If you have changed your address this is the right time to let us know (by writing to segreteria@wikimedia.it).

Some time ago Sestopedia project was launched: its aim is to create on Wikipedia a set of articles about the city of Sesto San Giovanni. Starting from the idea that a lot of information about the city lacking on the web and on the books, but are very present in the head of senior citizens, the project promoters have decided to involve the citizens asking to create Wikipedia entries, or simply to tell stories (filling out [a simple form) in order to spread them and make them available online to everyone.

In addition to virtual editorial work, the project includes several events and meetings with citizens: you may find the full list on the website. Here we would like to point out some imminent appointments: Saturday, March 22 we'll have a lecture entitled Writing in Wikipedia organized in collaboration with Wikimedia Italia at the library Cadioli. Saturday, March 29, citizens are invited to help in the collection of material to write entries on the gardens of the historic mansions of Sesto San Giovanni. This will be a preparatory meeting for the event promoted on the Liberation Day: from April 25 to 27, within the event Sestoinfiore it will open the path to the QR-codes in the historic gardens of Villa Mylius. The QR-pedia of all plants will be added, in collaboration with Fior di Mylius Association and Councillorship for the Environment.

The project Sestopedia is sponsored by the NGO Associazione Lavoro e Integrazione and is coordinated by Giusi Castelli; Giusi is a member of Wikimedia Italia and is very active on the mailing list of the association, where reports all the news reports of the project (to subscribe to the mailing list, contact: segreteria@wikimedia.it). 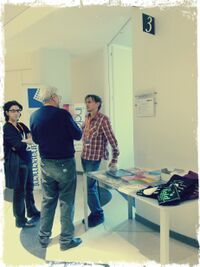 Notice: this newsletter is exclusively intended for information about Wikimedia Italia, both to its members and to the general public; as per Art. 1, Comma 2, Legge 7 marzo 2001 no. 62, it is not an editorial product
Estratto da "https://wiki.wikimedia.it/index.php?title=Wikimedia_news/numero_72/en&oldid=287051"
Categorie: