This is an English translation of Riconoscimenti

,
it may be not updated or may be different from the original 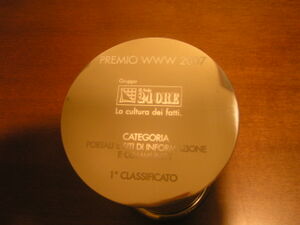 The trophy - a 24 minutes hourglass

The Italian edition of Wikipedia have won again PremioWWW, organized by "Il Sole 24 Ore". The tenth edition of the prize stated Wikipedia as leader in the category Community and information web sites. 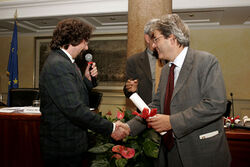 The Italian edition of Wikipedia and Wikimedia Italia have been awarded the Premio Aretê 2007 - forum per la Comunicazione Responsabile (Aretê prize - forum for the responsible communication) for the "internet" section with the following motivation;

for the commitment in favour of the diffusion of the universal knowledge, in a free, collaborative and constructive way, in the true spirit of the original ideals of the Net.

The prize has been presented by Paolo Gentiloni, the minister of the Communications and president of the jury, on the 5th of November in Rome, Montecitorio palace (Italian Chamber of Deputies), to Gianluigi Gamba, president of Wikimedia Italia.

The plaque of the prize

In 2007 Wikipedia was granted one of the nine Special Prizes of the Grand Prix di Pubblicità Italia (Advertising Grand Prix of Italy) for succeeding in exploiting the Internet potential at its best, directly involving users for a widespread growth of culture.

Wikimedia Italia board member Ivan Vighetto attended the gala on the 28th of May, and received the prize, a plaque.

In 2005 the Italian edition of Wikipedia has won two awards at the PremioWWW (WWW Prize) organized by Il Sole 24 Ore:

The awards have been given to Frieda Brioschi, president of Wikimedia Italia, on the 14th of December in Milan.