Wikimedia Italia stand at Festambiente 2009: a regular rendezvous since several years ago for the association. P.S.: Mauro is not slimmer than usual; he just held his breath...
Wikimedia Italia has entered its 4th year on June 17.

As you may know WMI is a piece of my life: I worked for a year with about thirty people to bring it founded, then for 3 years, as chair, I took care of it, and during the year I spent in WMF I was an advisor of WMI too. I did not become richer, I lost hours of sleep, I had to plan very carefully my work/family/events to participate in, to gain a kind of balance, lawyers emails and telecommunication police phone calls are normal routine; on the other side I met many people, I was lucky enough to tell what we do to many people and in many occasions, humanly I'm a much richer person than 4 years ago.

I do not intend to provide links or lists, but also WMI, thanks to many of its members and the constant engagement of all the boards who have led the association, has come a long way. The 17 founders are now 150 members, still (slowly) growing. None of us was born wikimedian or member of an association. We tested, tried, made errors, restarted, we set ambitious goals.

The year ahead will be very hard:

Perhaps it is the last point that worries me much. I was able to find just 2 reasons to explain to me why the commitment of the members is not increasing any more: either the people sign up to give us financial support or they do not agree with what WMI makes. That's why this year during the assembly, I'd like to meet more members as possible, and people who do not know or don't like Wikimedia Italia as well; I'd like to talk and discuss, and define together the objectives of this year.

Finally, the hardest part. At the moment there is only one candidate to the board, who applied many months ago. (update: right now while I am writing there are 4 candidates) Now that on the WMI (and thus in some way on the past board, and myself too as legal representative) hangs the sword of a 20 million euro lawsuit (so much we were asked by Mr. Antonio and Giampaolo Angelucci, for wrong contents appeared on Wikipedia), I do not see too much interest in running for the board.

Let me remind you, to the boredom, if necessary, that Wikimedia Italia:

I'm almost tired to repeat always the same stuffs to everybody .. but you know, in Italy it is easier to file a lawsuit against the first person you meet (in the hope of involving and accusing him), rather than to inform and embark on an international cause whose jurisdiction is San Francisco. Actually what upset me more in this affair is that there has been no prior contact with the association neither with OTRS nor with Wikimedia Foundation, only and solely the summons. I hope to meet you in Rome on 19 September. There is much to discuss, much to do, and much need of you. 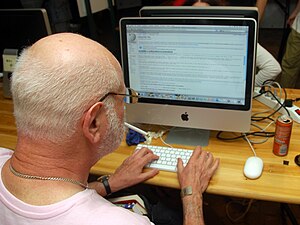 Biografilm Festival: Elliot Tiber edits the article about him on en.wiki (pity the computer crashed before saving).

Some really volcanic users started the first two collaborative translations: "Equitazione" (Equitation), by Henry Louis de Bussigny and "L'arte di ottenere ragione" (The Art of Being Right) by Arthur Schopenhauer. It you want to participate to this effort or want to propose other public domain works, go to http://biblioteca.wikimedia.it/wiki/Pagina_principale

Biografilm Festival 2009: Petra Seeger edits the article about her on en.wiki (she managed to save it!).