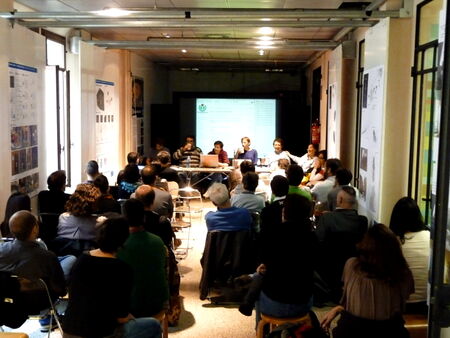 Saturday, October 19th we held the second annual meeting of Wikimedia Italia, at the Biblioteca Sala Borsa in Bologna. The regular memebers' meeting was preceded in the morning by a public meeting on Libraries and Wikipedia: encounters and possibilities. The speakers (Luca De Biase, Frieda Brioschi, Andrea Zanni, Virginia Gentilini, Piero Grandesso) emphasized the crucial role of libraries and institutions in interpreting the change in progress in the knowledge, change that passes through the web.

In the afternoon there was the meeting itself, characterized by a very heartfelt participation, thanks to the presence of new members and intrigued supporters. As usual, the resolutions approved in previous months by the Board were presented and voted: the most significant note is the intake as part-time secretary of Alessandra Gasparini and the agreement with the National Central Library of Florence. Highlights of the subsequent discussion, were the opportunity to incorporate the (not yet existing) Italian chapter of Open Street Map within Wikimedia Italy and the candidacy of Esino Lario as a place to host Wikimania 2015 edition. Following a really felt discussion, both proposals were approved (the first unanimously, the second by a majority vote). Afterwards, Emma Tracanella (Director of Wiki Loves Monuments Italy) told about the 2013 edition of Wiki Loves Monuments Italia, flanked by Nemo whose support has been instrumental in the organization of the competition. In conclusion, some observations were made on the other projects the Association schedules for 2014. Please refer to the report (prepared by MLWatts, elected secretary of the meeting) for full details.

Wikimedia Italia sincerely thanks all those who participated and contributed with their help to the success of the meeting.

Iberocoop is the co-operative that puts together the working groups of the Wikimedia movement operating in Latin America, Spain, Portugal and Italy. From 12 to 15 October 2013 the third meeting of the chapters involved was held in Mexico City: Iberoconf2013. On behalf of Wikimedia Italia participated Atropine, who recounted in a very thoroughly report what happened during the conference. The main topics covered were the future of Iberocoop and its internal organization, Wiki Loves Monuments, educational projects and the possible future meeting, Iberoconf2014 in Uruguay. Carmen Alcazar of Wikimedia Mexico was appointed as a new coordinator, with the technical support of Wikimedia Argentina. For full details, see the report of Atropine, who in conclusion said: "What I have seen during this Iberoconf is that people really want to do things and to show that Iberoconf is an effective and replicable entity."

The report for Wikimania 2013 is finally on line. Many Italian members took part to Wikimania: eight of them, in particular, have benefited from WMI sponsorships for the participation. The sponsorship program's main objective is to encourage and Italian Wikipedians and Wikimedians to take part in rallies, in order to promote the projects of Wikimedia Italia. Moreoverm there is the desire to enrich each meeting with the enthusiasm and experience of different groups of the Wikimedia movement. At the end of an event, all those who have benefited from the stock market are asked by WMI to tell their impressions and a list of meetings attended. On the dedicated page you can find and read all the reports.

SICamp, organized by the newborn Impact Hub of Florence, was an occasion for young start-ups to meet, an opportunity to "accelerate" their ideas confronting others and also meet with potential investors. Wikimedia Italy was present (with Laurentius and Aubrey) to bring the experience of collaborative communities, free licenses and crowdsourcing. The three days were extremely interesting: our representatives had the opportunity to show everybody open source projects such as Open Street Map, which at least two start-ups will try to incorporate into their services.

On October 26, a Bibliohackathon was held at the National Central Library of Florence (BNCF), organized by the Library itself and Wikimedia Italia: the initative was of course born in the group GLAM/Libraries. The aim of the meeting was twofold: to let the activities of the group be known and to offer an opportunity for deepening of the ongoing activities. The meeting was opened by the organizers Giovanni Bergamin (representing the BNCF) and Andrea Zanni and Cristian Consonni (Wikimedia Italia).

The first intervention was that of Marco Masucci of Informatica libera (Free Computer Science) about Free Software; then Luca Martinelli illustrated the potential of Wikidata.

Raffaele Messuti then introduced the software OpenRefine; following it, Maurizio Napolitano told about the OpenStreetMap project, pointing out how many different and unexpected feature could arise from it. Anna Lucarelli of the National Library closed the morning session, illustrating the relationships created in recent months between Wikipedia entries and the BNCF Thesaurus.

The day's program can be seen here.