At Turin from November 29th to December 3rd will take place the Public Domain #OpenFestival: 5 days of conference, meetings, workshops, expositions, shows, theater reads, with a total of 50 special events that concern the several spheres of art, photography, music, literature, theater and cinema. The event's aim is “learn the meaning of public domain and enjoy its ethical and economical value in every field of human knowledge”. Even Wikimedia Italia will join to the conference too. 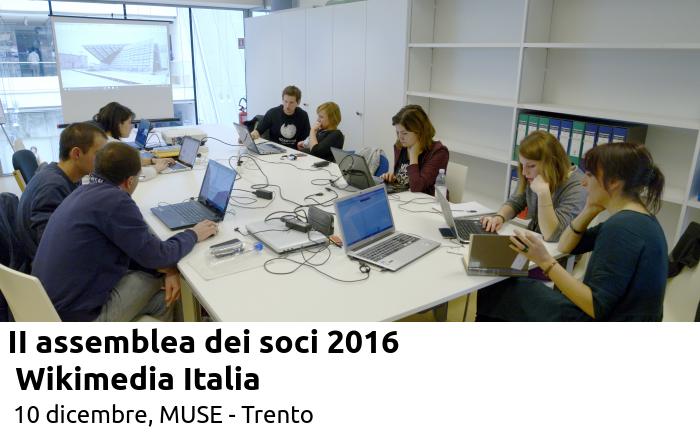 Edit-a-thon at "MUSE - Museum of Sciences" of Trento. By Niccolò Caranti (MUSE). This picture has been uploaded by MUSE in collaboration with Wikimedia Italia. Own work, CC BY-SA 4.0, from Wikimedia Commons

On December 10th at Trento the second meeting of WMI members

The second ordinary meeting of member for 2016 is fixed for Saturday 10th December. It will take place at Museum MUSE of Trento, with the first convocation at 10:00 am and the second convocation at 2:00 pm. The day will start with a one-hour visit to the museum, which will be free for all Wikimedia's members, then the assembly works will be opened and will go on until 1:00 pm. In the afternoon – after lunch break – there will be the presentation of the strategic plan for the next three years and the budget of the 2017, besides the ratification of the resolutions of the board of directors. For participate to the assembly you have simply to registrate, completing the form on the platform Eventbrite (is free and it takes just two minutes), where is possibile to confirm own participation to guided tour of the Museum. The participation is open to all, but only members in compliance with the payment of the 2016's contribution have the right to vote and delegate. 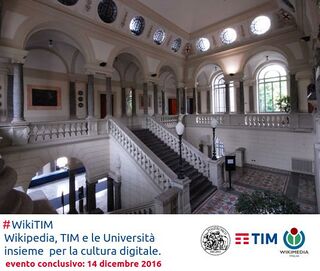 The final event of #WikiTIM.

On Wednesday 14th December it will be reached the goal of the project #WikiTIM, realized by Wikimedia Italia in collaboration with Telecom Italia with the aim of enrich and improve the quality of Wikipedia's articles concerning the culture and digital tecnology. The final event will be take place at the Politecnico of Milan, with the publication of new scientific and tecnological articles, created by the contribution of students and professors. The articles will be enriched with the inedit pictures of TIM historical archive of Turin, made available on the web. Our Wikipedians volunteers Niccolò Caranti and Federico Leva will support the students and professors of Politecnico during the publishing. 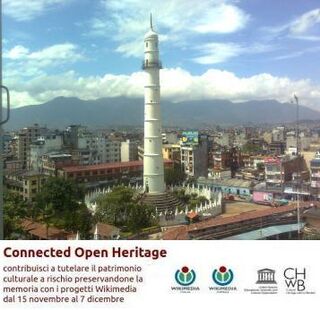 Dharahara at November 2011, by Sugat Shrestha - Own work, CC BY-SA 3.0, from Wikimedia Commons

The photo contest linked to project “Connected Open Heritage” is going ahead: the first photographic stories uploaded by Italians users of Commons are already online here. Until December 7th 2016 you can suggest sequences of pictures in order to tell a story about a particular monument, showing through images the trasformations suffered as a result of wars, natural disasters or human carelessness, preserving in this way the memory. We are waiting for your stories!