A new board, new members and new ideas... this seems to be the output from the meeting in Caserta, which marks out the activity of our association during last month. When you read this issue of wikimedia news you'll notice how ideas, new proposals, and committments of our association are today various more than ever, so that they need not only care from the board but also and above that the whole WMI takes active part in them.
I wish a happy social year to every member and to the board, and I hope that it will bring growth and development to our Wikimedia Italia.

Wiki@Home staff made a WMI report (in Italian) for the event, and an interview (in Italian) to the new appointed Board.

The Copyleft Festival in Arezzo has been a really good place to make contact with the world in favour of the free spread of knowledge. We have a notable talk with the staff of Schiaffo Edizioni, who will probably add some of their short stories in Biblioteca. Also notable was a talk with the organization, which led to the possibility that next year WMI will take part to Italia Wave (one of the most important music festivals in Italy). Out presence wouold be important especially since we are broadening our scope to include music.
We also met the authors of Don_Zauker, an Italian comic strip, who agreed to look at the articles about them in it.wiki and who gave us an illustration for the comic in cc-by-sa.
As for participation... well... we had continuing rain, with very few glimpses of sun. It was however nice to talk with many users of it.wiki, who asked us a lot of questions and bought some gadget.
From an economic point of view, taking into account the really bad weather, the result was rather satisfactory.

During the meeting in Caserta, a report for the last season of interviews has been shown. Torsolo won the Wiki@Home Prize 2007/08 (see article (in Italian) on Wikinotizie). An interview to the mathematician Piergiorgio Odifreddi is in the works; who wants to cooperate may access the relevant page.

We just started a new project under the umbrella of Wikimedia Italia: Musica. Its goal is to collect songs, lyrics and scores released under a free license. Musica will be officially launched at the end of October at Faenza, during M.E.I. 2008. Before that date, all members are invited to give their contribution to let this new idea start well.

After a quick poll we decided to split Biblioteca in two sections, one for texts which cannot be put on wikisource because of differences in copyright laws between Italy and U.S., and another for recent texts released under a Creative Commons license. Now we are discussing al the project's Village Pump how to put in practice this split. 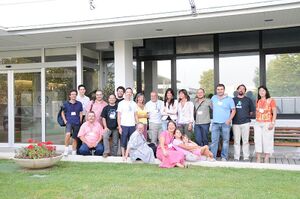