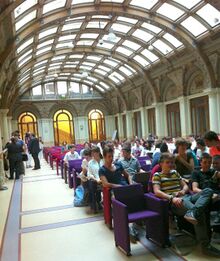 In late February, teachers and students from various schools of Emilia Romagna attended an introductory course on Wikipedia. The course – taught by members of WMI – was the start of a project carried on with schools, managed by Emilia Romagna APTServizi (the body promoting tourism in the region), Wikimedia Italia and the Regional Office of Education.

During the course they have found that yes, they too can write Wikipedia articles; and no, there is nobody double-checking the contributions before publication. After the shock for a very different approach than that of the world of education was over, the classes just jumped into the project with enthusiasm, working for three months on the items they adopted. ("Adotta una parola" in Italian means "adopt a word", indeed).

To describe the experience, let's quote the words of Giovanna Morini, teacher involved in the project: Really, the guys played a pretty active role, [...] a role as students 2.0, not just as users who believe passively in everything they find in the web, as if it was a television! We hope that this kernel will be left to the kids as an active way to approach the study and the environment around them, and to the school and the teachers as a "rich" educational methodology to be exploited again. Adotta una parola va a scuola

Wikimedia Italia published the fourth WikiGuida, a quick and direct video which explains everybody what Wikiquote is: a rich anthology of quotations, added one by one to the users themselves, together with their sources... WikiGuida Wikiquote

Iberoconf 2012 has been a conference held from 31/5 to 3/6 in Santiago (Chile) within Iberocoop, international collaborative initiative. For Wikimedia Italia Aubrey and Cristian attended. Iberocoop

Wiki Loves Monuments is looking for new public and private monuments to insert in the list of what can be photographed for the contest. If you know a nice monument and you want to help us, consult the site: http://www.wikilovesmonuments.it/2012/06/la-lista-dei-monumenti/