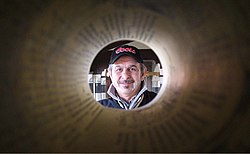 We open this newsletter with a sad news. Some days ago Tullio Arecco, known on Wikipedia with the nickname Twice25, passed away. He joined the encyclopedia back in 2003.

Twice has never been a member of Wikimedia Italia or sysop of it.wikipedia (except for a temporary assignment a few years ago to help in the clean-up of contributions in violation of copyright) because he was not the type who loved this kind of commitment, but he has always been an expert contributor and a pillar for the community.

Twice always had in mind that Wikipedia is made ​​up of people before articles: it was not a chance that the first meeting of Italian Wikipedians was held in Genoa, where he lived; Twice helped organizing and was the perfect guest. Our condolences go out to the family and Rina, his partner.

On February 21, initiative Wikipedia and women will be held in Lugano, organized by Wikimedia Switzerland and Associazione Caffè Culturale Lugano. Frieda (chair of Wikimedia Italy) and Emma Tracanella (project manager for Wiki Loves Monuments) are among the guests for the initiative.

Saturday, March 2, 2013, in the press room of Telecom Italy (Piazza Affari 2, 20123 Milano) the Ordinary Members' Meeting of Wikimedia Italy will be held. The meeting is open to everyone, but to participate you must register for free on Eventbrite, where you will also find the program of the day. It takes just a minute!