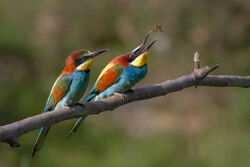 The seventh competition "Picture of The Year" on Commons is over. The protagonists of the winning photo, shown at left, are two Bee-eaters and an unlucky insect. Browse all winning photos on Commons.

March, time for our assembly!

The assembly of the Wikimedia Italia took place on March 2 in the press room of the headquarters of Telecom Italia, in Milano. In the morning we attended the presentation of the "Wikimedia Italia - Telecom Italia - Università Cattolica Project" (a synopsis of the project will soon be added on our website) by Federico Ascari (Telecom Italia), Nicoletta Vittadini (Università Cattolica), Chiara Ottaviano (Telecom Italia Historic Archivers) and the six graduating students involved in the project. Then we had the presentation of the other ongoing projects which will characterize 2013 (Veneto in Wikipedia, Archeowiki, Wiki Loves Monuments Italia 2013); we hosted Matteo Ruffoni (WiildOs) who proposed a partnership with schools on several topics: Wikipedia in the classroom, an Italian equivalent of Wikipedia in "Simple English" and textbooks released under Creative Commons.

In the afternoon the actual assembly took place, with the renewal of the Board (all members of the previous one were re-elected) and of Board of Trustees(one new member), the approval of the financial budgets (2012 actual and 2013 planned), all preceded by presentation of the fundraising actions we intend to undertake during the year and by a vote on a small change to the Internal Regulations (we added the paragraph "Status of a member") to clarify the "life cycle" of a member for the association. In closing, there was also time to exchange a few words about Wikimedia Conference (to be held in Milan from April 18 to 21).

The Giannino affair: when fact-checking means a lot

Oscar Giannino, a business journalist at the head of the list To Act to Stop the Decline, resigned from President of the movement a few days before Italian general elections, after it was discovered that the master in economics that he had claimed to have achieved the Chicago Booth University was nonexistent. The news was discussed for a long time, but the trigger was in all probability a post written by Wikipedians Jaqen and Tooby. Read the analysis on the Wikimedia Foundation blog; another report may be found on the Italian blog Voices.

Your "cinque per mille" to Wikimedia Italia

Italian law allows people to select a non-profit association to which devolve 0.5% ("cinque per mille") of the tax to be payed. By donating to Wikimedia Italia, you can support your projects without spending anything. If you do not have to file your tax module, request the module for the choice of the association to your employer or the entity paying your pension, and compile it indicating the tax code of the association: 94039910156. More information on this page. Thank you for supporting us!