WikimediaNews - no. 53 - May 29, 2013
Official bulletin from Wikimedia Italia Association. 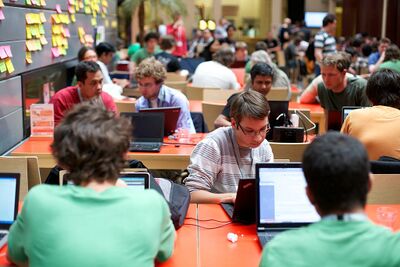 Over the weekend from May 24 to 26, the Wikimedia Hackathon 2013 was held in Amsterdam. The annual gathering, which brings together all Wikimedian interested in the development of MediaWiki and other Wikimedia projects, was organized by Wikimedia Nederland and was held at the Stayokay hostel. There were about a hundred Wikimedian; the participants appreciate the Dutch organization which was impeccable. Cristian (vicepresident of Wikimedia Italia) was present on behalf of Wikimedia Italia and Wiki Loves Monuments international group. In addition to numerous other projects, Wikimedia Labs were presented: tjey are the new infrastructure that will manage the development of new tools for Wikimedia sites.

Are you determined, do you like to work in teams, to interact with the public? Are you willing to learn some new computer program?! Then read the announcement for a secretarial employee published by Wikimedia Italia. Our staff is growing! All specifications can be found on the dedicated page: here we anticipate that the workplace is in Monza (with occasional short trips) and that the type of commitment required will be 20 hours per week (horizontal or vertical part-time).

If you are interested, send your CV and a presentation letter to the email address lavoro@wikimedia.it.

Veneto in Wikipedia is a competition, organized by our member Professor Corrado Petrucco from the University of Padua together with Enrica Pagano and Simonetta Boscolo in collaboration with Wikimedia Italia, planned to invite classes of students of schools of all levels to create or improve entries on Wikipedia. Monday, June 3 a meeting will be held for the closure of the project. Cotton will participate for Wikimedia Italia: Cotton will talk in particular about the criteria used for the evaluation of new entries in Wikipedia created by the children. At the conclusion of the meeting the best work will be awarded. The event will take place from 16:00 at the "Einaudi Gramsci" institute (via delle Palme, 1 35137 Padova); here the complete program.

The Engineering and Product Developement department of the Wikimedia Foundation is looking for two or thres Community Liaison, Product Development, i.e. representatives of the local Wikimedian community who will act as intermediaries between users and the engineering team, supporting them in the activation phase of new extensions on the sites of projects of the Wikimedia Foundation. This would be a task for a period of about 3 months, which requires a minimum commitment of 15 hours per week. In particular the urgent need at the moment is on the launch of Visual Editor on Wikipedia in different languages​​; they will need, for example, to explain to their community the news and manage useful feedback tools significant to the computer development department. Basic requirements are knowledge of the English language (as well as Italian), years of experience as active users on Wikimedia sites (not just Wikipedia) and excellent communication skills. To apply, you must write to Philippe Beaudette at pbeaudette@wikimedia.org. Read through the requirements and then, if you know you have a few free hours to devote each day, you can apply or invite some Wikimedian friend to do so.

Pages most seen on Italian Wikipedia

The list with the most visited articles in Italian Wikipedia has just be updated. Reading it provided an insight on how users make use of the free encyclopedia. In April, for example, Italian politics and television series are the most browsed categories of voices.