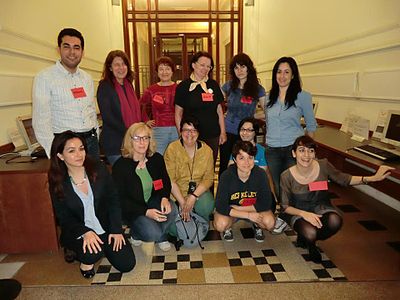 On Thursday, May 30 in Crema the conference "Librarians tell themselves: challenges, opportunities and partnerships" was held. Our member Virginia Gentilini attended it with a talk about Wikipedian Librarians: hardware and software of a collaboration. At this link you can view the slides used by Virginia for his presentation.

By now the voice of the courses and workshops on Wikipedia kept in libraries is spreading and more and more professionals ask about the options available to them, particularly with regard to initiatives aimed at users. Among these, the laboratory for beginners is proving very successful (Saturday, June 8th we held the second edition of the course with P tasso, at the Biblioteca Salaborsa in Bologna). The structure of the meeting is simple: in the space of about three hours, a diverse audience is presented an overview of the operation (behind the scenes) of the Wikimedia projects, with particular emphasis on Wikipedia. They are then invited to try their hand at creating a user and a personal sandbox (on Wikipedia), to try to get their hands dirty and experience firsthand the modifiability of the encyclopedia.

(Happy) Ending for Veneto in Wikipedia

On Monday, June 3rd we had the closing ceremony for the edition 2012-2013 of Veneto in Wikipedia project (organized from our member Prof. Corrado Petrucco at the University of Padua, together with Enrica Pagano and Simonetta Boscolo, in collaboration with Wikimedia Italia). In addition to students and teachers involved, the event was also attended by representatives of the Regional School Authority and two officials of Directorate of Cultural Heritage and Landscape of Veneto, Ms. Meneghetti and Mr. Polloniato. The two officials were really satisfied with the entries created by the boys, end they also expressed appreciation for the role Wikipedia plays in adding value the Italia artistic and cultural heritage. But it was just the boys and girls who responded with the greatest enthusiasm, together with their teachers, who on this occasion were able to experiment and perfect their digital skills. At the end of the day prizes were awarded to the best entries written by the students, who did not hide the pride for having contributed (even if only for a small part) to the collective wisdom of Wikipedia. The following three entries were judged best: 27Artemio Sant'Artemio Ex-Psychiatric Ward (ISISS Casagrande Pieve Soligo); Gaetano Cozzi (ITIS Planck Lancenigo) National Archaeological Museum of Venice (Istituto Venezia Marco Polo). As stated by Professor Corrado Petrucco: "It's never too early for Wikipedia!" The younger students are in fourth grade.

From Saturday, June 8 and up to Saturday 22 of the same month, members of the Wikimedia community have the opportunity to elect two candidates for the Funds Dissemination Committee (FDC). The purpose of FDC is to assign funds to Wikimedia chapters and other groups (Chapters in development), through the evaluation of the extent to which these funds will allow such entities to have an impact on the achievement of the institutional goals of the Wikimedia movement. Among the candidates there is also the vice president of Wikimedia Italia, CristianCantoro, which states: «I think the goal of FDC is to cope with the difficult challenge to ensure the highest level of transparency and effective as possible (to ensure that donor money is well spent), and on the other hand to give people from all over the world the means they need to carry out initiatives in favor of free culture without an excessive level of bureaucracy being an obstacle (we should never forget that the volunteers' time is valuable both for themselves that for the movement) [...].» Here you can read the complete profiles of the candidates.

We received the news of an interesting initiative called Female Engineers Pushing Innovations in Companies (FEPIC). The project, supported by the European Union in the framework of "Lifelong Learning Program", is coordinated by the University of Bologna (on the initiative of Professor Miretta Giacometti) and has the support of 20 partners from Estonia, Germany, Italy, Malta, Poland, Sweden, United Kingdom, Hungary. The main objective of FEPIC is to create an e-learning tool for professional women, in order to promote gender equality and combat the underrepresentation of women in top positions of the organizations. I would like to be a leader is the name of the (free) online tool developed by the partners involved; it is a training program designed to increase the skills of creativity for innovation and leadership, with a gender perspective (it is available in Italian, English and other four languages).