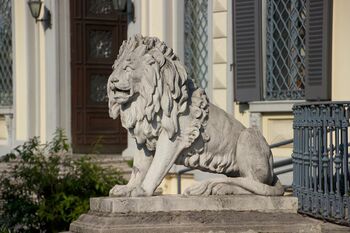 "Entrance of Rinascente department store in Monza. From Wiki Loves Monuments Italia 2012" - By Tbj61898 (Own work) [CC-BY-SA-3.0], via Wikimedia Commons

In 2013 edition, Wiki Loves Monuments also promotes local sections' of the competition dedicated to monuments in a small zone. Wednesday, June 26th, the first local section was presented with a press conference at the "Binario 7" in Monza: 'Wiki Loves Monza and Brianza. During the conference, Emma Tracanella (Project Coordinator) and [[[w:it:Utente:Frieda|Frieda Brioschi]] (President of Wikimedia Italia) were joined by distinguished speakers: Enrico Elli, Councillor for Culture for the Province of Monza and Brianza; Angelo Scarano, Representative from the Bar Association of Monza; Maria Pia Marini, Marketing Contact of the Chamber of Commerce of Monza and Brianza. In addition to the contest, the initiative provides for the organization of Wikigite on the territory of the Province, of upload party at the headquarters of Wikimedia Italy (Monza) and the establishment of an exhibition dedicated to the contest after it will be completed. We remind you that everyone can participate to and help Wiki Loves Monza and Brianza: you can signal a monument, ask permission to a handler or owner of property for taking photos, or explain to your local municipality or a private entity the few simple steps necessary to take part to the initiative. For any information the reference address is contatti@wikilovesmonuments.it.

Some weeks ago we reported that Wikimedia Foundation was searching for local Wikimedians who supported Engineering and Product Developement when they were rolling in new extensions. For Italy the choice fell to [[w:it:Utente:Elitre_(WMF)|Elitre]: compliments! Here there is the translation of her presentation letter written for Wikimedia Italia.

I am not a member of Wikimedia Italia, but I feel obliged to introduce myself here as well, as several members of the association are involved in the dissmemination of WMF projects and often also teach its operations.

I'm Elitre, I am part of the Wikimedia movement since 2005 and a few days ago I was hired by the Wikimedia Foundation to support in every way the Italian-speaking community (mainly) in the transition to VisualEditor. Here there is a summary the news for those of you not editing frequently and who do not follow other places of community discussion, apologizing to who is already aware of the theme. In short, VisualEditor will change the way you edit Wikipedia (and later also the other projects), making it easier and "retiring" the wiki syntax. Not only the system is already active, but the beta version, which will become the default, will arrive in July, and it is good to become familiar with it, and help us in discovering any malfunctions well before that date! If you do not know how to activate it or would like more details, see http://it.wikipedia.org/wiki/Wikipedia:VisualEditor.

The answers to the most frequent questions have been collected here, and a manual was also sketched. Several users are already reporting their experiences and communicating their observations: we therefore expect many of you on this page. For any communication, use my user page Elitre (WMF) or the email elitrenta at wikimedia.org.

Thank you and have a nice day!

Elections for Funds Dissemination Committee and Board of Trustees

From June 8 to 22, the Wikimedia community has been called to vote to elect three new members of the Board of Trustees of the Wikimedia Foundation; concurrently, for the first time, they voted for the Funds Dissemination Committee (FDC) and the FDC Ombudsperson. According to the organizers, the management of elections at the same time made the voting process more complex, but Monday, June 24 the official results were regularly announced: valid votes were in total 1809. We are proud to announce that Cristian Consonni, vice president of Wikimedia Italia, was elected among the members of FDC.

Waiting for more detailed statistics, here there are the names and nicknames of the elected:

#nuovoSBN: an opportunity not to be missed

Thursday, June 20 the meeting Reviving the National Library Service (SBN, "Servizio Bibliotecario Nazionale") took place. The appointment was promoted by the Italian Library Association (AIB, "Associazione Italiana Biblioteche"), Lazio AIB Section and the Goethe-Institut in Rome to discuss the future of national library services; high institutional officers were present. For the occasion, some members of the discussion list for librarians and Wikipedians have written a joint letter in which they advance some proposals and ideas with the hope that they were dealt with in the Rome conference. Title of the letter was: Reviving SBN: an opportunity not to be missed. One of the objectives of the appeal was to bring together the two souls of the library world, the one tied to the more traditional concept of "library as a physical place" and the one more interested in sharing data, their quality and the free re-use. Thanks to the initiative of the librarians-Wikipedians, the day was followed by an intense and animated live tweet: by consulting the hashtag page #nuovoSBN you can get a general idea of what has been the spirit of the meeting of 20 June. The discussion list for librarians and Wikipedians contributes with its work to a wider debate on the library world ,and will continue to monitor the situation and take action to listen to their ideas: you are all welcome!

Past and future appointments