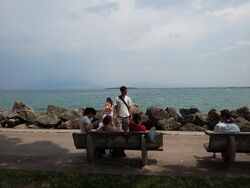 Museums, schools, archeology and Wikipedia: project Archaeowiki is almost ready to meet its public. Our Wikipedians in residence (Jaqen, Yiyi and Phyrexian) are working side by side with the archaeologists of G.A.AM - Ambrosian Archaeological Group Ambrosian for the preparation of meetings and activities aimed at the development and documentation of the collections housed from six museums in Lombardia. The project is based on teaching moments combined with guided tours ("wikigite") in museums, showing the public and institutions the wiki way to see the culture. Two types of wikigite are provided:

More information will soon be available in an overview post featured in the Wikimedia Foundation blog. We eill inform you as soon as it will appear.

On January 30, 2013 Cesare Previti, a former adviser to Silvio Berlusconi, has filed a lawsuit against the Wikimedia Foundation, arguing that the article about him posted on Wikipedia Italian is inaccurate and defamatory and that, the WMF was therefore responsible for having provided a place to spread that content. On 20 June 2013, the Court of Rome has expressed its opposition, noting that the Wikimedia Foundation is offering only a hosting service, cannot be responsible for everything that is written by individual users and, moreover, that given the open and fluid nature of the projects, these aspects are explained very clearly. In addition to the legal victory, it is significant that the judgment will rest in part on what is one of the cornerstones of Wikipedia: anyone can edit entries or to report inaccuracies to the community of volunteers. Consequently, according to the Court of Rome, Cesare Previti could advance their grievances directly to the community, which plays the main role in creating and managing content.

GfOSS, the Italian Association for free geographic information, announced that from 10 to 11 October this year the sixth edition of GFOSS Day will be held in Bologna.

Purpose of the conference is to involve businesses, government agencies, developers, citizens, industry and fans of the themes of free software and open geographic data. The event is organized in collaboration with the Regione Emilia Romagna and received the patronage of Department of Civil, Chemical, Environmental and Materials Engineering - DICAM and Department of Agricultural Sciences - DIPSA of the University of Bologna. The event will be open to all and free of charge.

The organizers asked us to write about it now, since the organizational machine is just gearing up, the program is still being developed and therefore there is room to send ideas and proposals.

Between June and September, during Bibliopride2013, the Tuscany Section of AIB (Italian Libraries' Association) organizes four Wikipedia courses for librarians and users: Pisa (16-17 July), Florence (23-24 July) , Grosseto (16-17 September); Scandicci (23-24 September). The courses are designed to collect updated and quality information about the libraries. Registration is required and must be made at least three days prior to the course by writing an e-mail to tos-corsi@tos.aib.it. At the end of the course a certificate of participation will be issued: those who will answer correctly the exercises will receive an additional certification. Lecturer will be Susanna Giaccai with the collaboration of some Wikipedian volunteers.