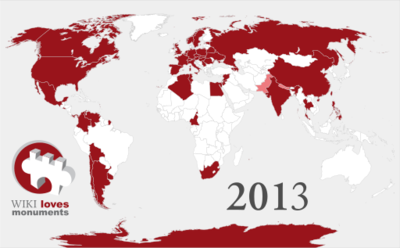 Sunday, September 1, Wiki Loves Monuments 2013 officially began. The photo competition is open to everybody who wants to help illustrate Wikipedia and enhance the world cultural heritage. The competition kicks off with the figures of the important achievements in the previous year (353,768 images received , more than 15,000 people involved) and with its recognition as "World's largest Photo Contest", as awarded by the Guinness Book of World Records in 2012 (as in 2011). In this issue there are news at the international level: 48 countries have joined, including several new entries, such as England, Armenia and Antarctica. We point out that you can follow online the evolution of the competition nation to nation; number enthusiasts should also not miss the sites with even more detailed statistics. In Italy we have received 13 sponsorships; more than 120 municipalities, associations and individuals have freed their cultural heritage for the competition, so that at this moment 971 monuments may be photographed (and the number steadily increases).

Here's what our president said , Frieda Brioschi, on the occasion of the launch: "Since its beginning, Wiki Loves Monuments had a huge success throughout the world, because the protection of artistic and cultural heritage of the entire planet is an issue really felt. We Italians are always sensitive to these issues, because we appreciate art and culture also as valuable resources for our country, as well as the pillars of world history. I am however very sorry that besides the unconditional support of WWF, regions and some superintendences, major entities as MIBAC [the Italian ministry for cultural heritage], FAI [Fondo Ambiente Italiano] and Italia Nostra systematically ignored the numerous attempts on our part to engage them. The aim of our project seems perfectly aligned with their charters; we should put our forces together, for a cause that has as its sole purpose the promotion of an immense heritage."

As we already announced in previous issues of WMINews, from the end of July 2013 a new editing interface for modifying Wikipedia entries, called VisualEditor (VE), is active. VisualEditor looks like a simple word processing program and does not require any knowledge of wikisyntax. Elitre is the contact person working with the Wikimedia Foundation to facilitate the introduction of the new instrument in the Italian community.

We asked her how things are going after about a month, and how Italian-speaking Wikipedians react. We learn that bugfixing is going on, new features are being introduced and that even many "historical" users accustomed to the classic mode of writing are using VisualEditor, and they are tirelessly helping to improve it with their advice. From a look at the Recent changes, however, is immediately apparent that, as expected, contributors using VisualEditor are mostly anonymous and newly registered users, thanks to its intuitive interface.

Frieda Brioschi (President of Wikimedia Italia) has become part of the Grant Advisory Committee, the commission made up of volunteers who help the Wikimedia Foundation in allocating funding.

Andrea Zanni (Head of projects for Wikimedia Italia) announced that a new international mailing list (in English) was born. The list is about Open Access to scientific literature. Zanni says: "If you're a librarian, a researcher, a hacker or just a lover of free culture, join us! We'll reflect together on how to make concrete the research and science of the commons goods ".

2013 member cards are arriving into the homes of all members of Wikimedia Italia. If you are not yet registered you can do so by following the directions found on the site, while if you need to communicate a change in your address this is the right time (write to segreteria@wikimedia.it).