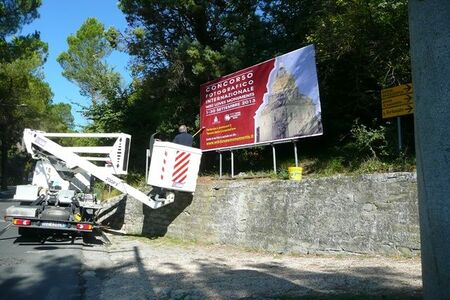 September is the month of Wiki Loves Monuments. The project takes up most of our staff's energy and increases office calls and email traffic: this is why we cannot but write a few lines in this news bulletin. The contest is halfway to the end and over 2000 photos have been uploaded already. More and more institutions are supporting the contest, especially Italian Municipalities (around 1400 at the moment), increasing the list of freed monuments. In addition, local events follow one another. For example, in Umbria there are countless initiatives, which are advertised daily in local newspapers. On September 16th the local administration of Perugia launched an opening event, inviting Emma Tracanella (Project Manager of Wiki Loves Monuments). In the city of Todi, a photographic course was promoted and a video advertisement launched to sensitize and invite citizens to participate in the contest, ETAB (Ente Tuderte di Assistenza e Beneficenza) played a crucial role in it. If you don't see your favorite monument in the list you can take action yourself, knocking on the doors of local administrations or private owners, asking for the authorizations to publish photos. We accept new subscriptions, but we are running out of time! You can also contact us and we'll try to help you. It's easy to find us: just send a mail to contatti@wikilovesmonuments.it or write us a message on Twitter or Facebook.

Wikimania is the annual international conference for users of Wiki projects. It was organized for the first time on 2005 in Frankfurt. In view of the 11th edition, Wikimedia Italia thinks outside the box and proposes as location of the conference a small town near Lake Como, Esino Lario. Esino Lario (Lecco District) is offering to host Wikimania 2015: the meeting would be surrounded by green hills, it will be sustainable and it will have a long term impact on the territory. Not anymore a conference in a congress room of a big city, but an event spread over a whole town that changes around it instead. Also the schedule would change, with site-specific conferences and meetings adjusted for the different audiences. Moreover, Esino Lario is a few kilometers from Milan, which will host the International Expo that same year. Wikimedia Italia project is not just an idea: a feasibility study has been done and the places were already checked out. On this page on Meta you can find all the information and add your suggestions about the project.

The school year has just started and Archaeowiki is about to begin! The main goal of the project is to bring archeology closer to the students through Wikipedia. In these days training for Wikipedians in residence and archeologists came to an end. The lessons were taught by the curators of the museums involved. The organizing committee is already in contact with some schools of Lombardy (junior high and high schools), but it invites all of you to contribute as well. Are you a teacher or an educator? A parent involved in school activities? Bring Archaeowiki into your school! The project focuses on the geographic area of Lombardia (Brescia, Cremona, Mantova, Milano, Varese Districts). The participation consists of a few actions: - teachers are trained on archeology and integration of education and Wikipedia. - students take part to guided tours of museums (called "Wikigite"). Preparatory activities precedes the visits, supplying students with information both on archeology and the use of Wikipedia. Schools interested can fill in the application form online. For details please write to segreteria@wikimedia.it and we'll be happy to provide the informational material needed.

September, 19th – Rovereto: Cristian Consonni (Wikimedia Italia Vice President) takes part in the launch conference of OSMit 2013, the annual meeting for the Italian community of Open Street Map. This year, Wikimedia Italia is one of the promoters. Registrations are open and everyone can make its own proposal for talks.

September, 21st – Schio: Software Freedom Day 2013, the world celebration of Free and Open Source Software (FOSS). The main objective of the initiative is to inform the audience on the benefits of using free high quality software in education, public administration, at home and for work. Wikimedia Italia takes part in the event with a talk on Wikipedia. A Facebook event was also created.

September, 25th – Milan hosts the Libre Office Conference 2013, the annual meeting for the world community of Libre Office which includes developers, managers, marketing experts and users. The opening session takes place in The University of Study of Milan's Aula Magna. All the technical sessions and workshops are hosted in the class rooms of IT Science Department.

Wiki Loves Monuments local visits (more are about to be defined, all the updates are on the official website of the contest):

- September, 21st: photowalks in Emilia Romagna, excursions to discover the local beauties with a special focus on the monuments freed for Wiki Loves Monuments 2013. Registrations for the three walks are open. All the excursions (in Parma, Ravenna and Bologna) start around 2 PM.

- September, 28th: bike tour (called “Take a picture and pedal”) in Sesto San Giovanni. The local administration promotes the visit that stops by all the cultural sites candidates for Unesco and those that obtained the authorization to be photographed for Wiki Loves Monuments. In order to register for the visit the participants have to fill in, sign and send a form to sestoperlunesco@sestosg.net. There are 100 places available.

- September, 28th: on the occasion of the European Heritage Days, the promoters of the local contest Wiki Loves Asti 2013 organize a photographic tour of the city. To participate online registration is required.