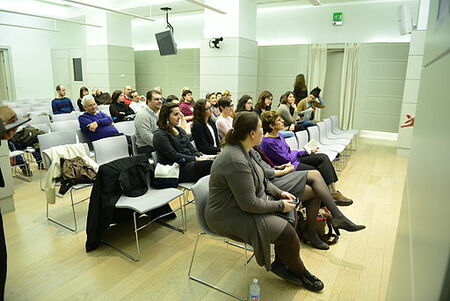 Once again this year it is time for our members to come together and confront themselves in the usual discussions on the hot topics of the upcoming seasons! The appointment is in Bologna, at the Biblioteca Sala Borsa, Saturday 19 October 2013. In the morning, Wikimedia Italia organizes in the Auditorium an event open to everyone, while the afternoon will be dedicated to the Members' Meeting at the Urban Center.

The first call is scheduled for 10:00 am, while the official start of work (second call) is fixed at 14.00. End will be approximately at 18.30. Among the items on the agenda, we will discuss on the events for next year, the organization of Wikimania 2015, the scrutiny of the projects in the pipeline for 2014, in addition to the ratification of the resolutions of the Board.

The meeting is public, but only members in good standing with the fee for 2013 are allowed to vote. We also invite non-members to take part in the event in the morning and to communicate their presence by filling out the registration form by 18 October. On our own site you may found instead indication for any proxies, in case you can not be present to the appointment.

The offer of hospitality to Wikimedians arriving in crowds to Bologna is always welcome: if you have a bed, a comfortable couch or enough space for a sleeping bag, report it on the site of Wikimedia page of the event.

During the month of September 2013, member cards were shipped to new members and those who have renewed in time the registration fee for 2013. If you have not received yet the card (despite having already paid up the fee) let us know by writing to our secretary. On the 2013 card stands the winning photo of Wiki Loves Monuments Italy 2012: the image captures the Ancient Roman Amphitheater in Santa Maria Capua Vetere and was taken by Nicola D'Orta, now also a member of Wikimedia Italy. As always, this photo has been released under CC BY-SA 3.0 and made ​​available to all on equal terms.

A card was also sent to those member who, at the beginning of September, they had not yet made ​​the payment, we are pleased to see that many of them are regularizing their position with enthusiasm! To everyone else, we remember the guidelines for renewal, that can be found here.

Wiki Loves Monuments 2013: all the numbers

Wiki Loves Monuments 2013 photo contest just endend. Once again, several records were outdone this year, both in the international and the Italian edition. A special thanks to all those who participated by uploading their photos, and to the volunteers of Wikimedia Italia who put their energies to make the 2013 edition a great success! Now you just have to wait for the verdict of the jury: the prizes can be found described in Wiki Loves Monuments Italia blog. For those who still did not have clear ideas about the contest, please read this article (in Italian) which appeared on Corriere.it and the interview (in English) released by Cristian Consonni (Vice President of Wikimedia Italia and ' member of the international team of Wiki Loves Monuments).

All over the world:

Monday, September 30 was the last day to apply to host the Wikimedia Conference 2014. By Tuesday, October 15 it will be established which chapter will be the next organizer of the conference. Candidates are four: Germany, India, Sweden, Italy. On this page, together with the individual proposals of the four candidates, discussions are ongoing on how to improve the annual meeting of the Wikimedia movement.

Wikimedia Deutschland has launched an initiative called Chapters Dialogue Interview. The goal is to collect stories, experiences, strengths and weaknesses of the chapters that make up the network of the Wikimedia movement, with the aim of defining the status of the current situation and lay the foundation for future development. Nicole Ebber, Head of International Affairs of Wikimedia Deutschland, manages the project accompanied by a consultant, Kira Kraemer, which in addition to his experience brings to the research her fundamental neutral point of view.