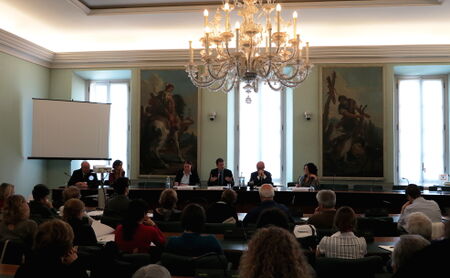 Thursday, November 7th a press conference of the project Archeowiki. New archaeologist in Lombardia. Real and virtual paths was held in Milan, in the picturesque setting of the Tiepolo room at the headquarters of the Cariplo Foundation (co-financing organization ). Faced with a large and varied audience Dario Bolis (Director of Communications and External Relations in Cariplo), Frieda Brioschi (President of Wikimedia Italia), Grazia Facchinetti (Superintendence for Archaeological Heritage of Lombardy) and Filippo Del Corno (City Councillor for Culture of the Municipality of Milan) presented the initiative. The public showed great interest in Archaeowiki: both for its values​​, including the sharing of knowledge as an engine of growth, and for its main purpose, namely attracting new users to archeology, especially young students, elderly people and the disabled. It was much appreciated, also, the fact that the project leans towards the less-known archaeological museums of Lombardy.

Following the meeting, several sites and online newspapers reported the news: La Repubblica, Ministry of Cultural Heritage and Activities, the City of Milan.

A few places for schools are still available. If you are interested, contact the secretary of Wikimedia Italia segreteria@wikimedia.it.

The time is finally over: we are ready to announce the winners of Wiki Loves Monuments 2013 Italia. The appointment is for Saturday, November 23, at 17:00 at the Libreria Hoepli in Milano (Via Hoepli 5). See you there!

WMI supports the creation of the Italian chapter of OpenStreetMap Foundation

The Italian community of OpenStreetMap is in turmoil: since long it is considering to to create in our country to a chapter of the OSM Foundation and during the last edition of OSMit, the Conference of the Italian community of OpenStreetMap, the idea of letting WMI become the Italian chapter of OSM Foundation was debated. The proposal was liked by members of Wikimedia Italy, so today all those who wish to contribute to the creation of OpenStreetMap Italia are called to arms: you can just subscribe to Wikimedia Italia, indicating as reason "to build the Italian OSM chapter." Our association, achieved 10 new members who sign with this purpose, will begin to define themselves also as the "Working Group for the Italian OSM chapter." When 25 users are reached, a request to OSM Foundation will be made to become the official Italian chapter. Even someone who is already a member can help achieve the quota: it's enough to make at least fifty changes on OpenStreetMap assets, and have at least three months of contributions in this regard. Do not delay! sign up to participate actively in the dissemination of OSM in Italy!

Friday, November 8, at the Mage in Sesto San Giovanni, the project Sestopedia was officially presented: Wikimedia Italy was represented by .mau.. Sestopedia, the brainchild of director and screenwriter Giusi Castelli and implemented by the non-profit organization Associazione Lavoro e Integrazione (Association for Employment and Integration), is based on what has been done in the Welsh town of Monmouth, which was completely "wikipedized" with the participation of their citizens. Sesto San Giovanni, which made a proposal to UNESCO to be insertes as World Heritage Site for its rich heritage of industrial architecture, would like to take this initiative, with the help of Wikimedia Italia for the part of computer literacy.