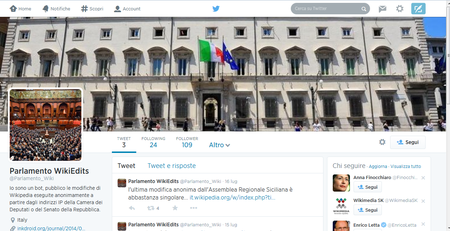 Wikipedia and Twitter cooperate in forbidding arbitrary and anonymous edits to articles about corridors of power around the world. Tom Scott, an Englishman, had the idea of creating a series of Twitter profiles to highlight all the edits to Wikipedia pages about powerful entities; then on July 9th Ed Summers, an American, created congress-edits: a profile where all edits to Wikipedia from anonymous users with IP addresses related to the US Congress can be showed. The goal is to preserve the transparency and reliability of Wikipedia. A similar account was just created also for Italy: its name is @Parlamento_Wiki and its stated goal is to “publish Wikipedia edits performed anonymously from the Italian Chamber of Deputies or the Senate of Republic”. 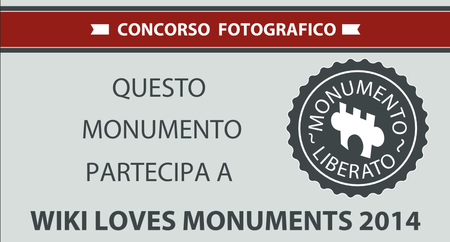 A close-up of the flier about "freed" monuments, by Alessandra Gasparini, [CC-BY-SA 3.0]

The new edition of Wiki Loves Monuments is growing and it reaches the large public: with the brand new joining of the Soprintendenza Speciale per i Beni Archeologici di Pompei, Ercolano e Stabia the contest is now richer in possibilities for people visiting the archaeological site with their camera. The Soprintendenza has “freed” all the monuments and the “emergenze” (protrusions) located in one of the most important sites of the world. Along with that there is a long list of Municipalities and Institutions, accessible in the dedicated page of the contest website. There are also planned trips in August and September to take pictures of participating locations: to know where to go, just watch the blog, updated as soon as a new trip is planned. You may also suggest a destination, writing at contatti@wikilovesmonuments.it. The only requirement is that it must be one of the participating Municipalities.

ANPI frees all its biographies

The ANPI (Associazione Nazionale Partigiani Italiani - National Association of Italian Partisans) published all the 3072 biographies of Resistance Women and Men under a CC BY-SA 3.0 IT license: thanks to the choice of a free license, a project started on Wikipedia to facilitate the creation of new articles and the extension of the existing ones using that material. This effort is part of the bigger “Biographies project” of Italian Wikipedia, that gives guidelines for consistent and easy to understand biographies published on Wikipedia.

The European Commission recently invited Member States to use licenses compliant to “open” standards while publishing their documents. The published guidelines aim to support institutions of different countries in complying to the Directive in public sector information re-use. Documents may be licensed, but the Commission urged the Member states to put them in the public domain (CC0 license) as much as possible. A list of licenses compliant to Open Source principles can be found here: Conformant Licenses

News from the wiki world

Notice: this newsletter is exclusively intended for information about Wikimedia Italia, both to its members and to the general public; as per Art. 1, Comma 2, Legge 7 marzo 2001 no. 62, it is not an editorial product
Estratto da "https://wiki.wikimedia.it/index.php?title=Wikimedia_news/numero_81/en&oldid=286991"
Categorie: